Solutions For All Of Your Technology Needs 24/7

Your Ultimate Source For IT and Security Services

April 15, 2013, was a sunny Spring day in Boston, Massachusetts that came to a tragic halt when someone decided to unleash a devastating act of terror on the running community at the finish line of the Boston Marathon. This act of malice and exploitation of large gatherings of unsuspecting people left the public wandering about current safety practices. While the nation sat on the edge of their seats waiting for the culmination of a three-day manhunt, police combed through video footage from security cameras that were located on Boylston street businesses. Through the use of surveillance camera footage and savvy work by experienced law enforcement agents, suspects were identified and brought to justice. Since then, the confidence in surveillance cameras has settled among the American populous. Some may argue that security cameras did not deter or prevent the crimes that were committed that day, they are perhaps the only way that law enforcement was able to solve the case, and so quickly. Here, we will discuss whether surveillance cameras are effective at deterring crime. 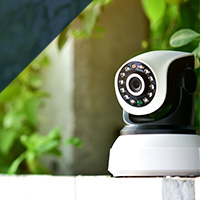 Obviously, security cameras cannot prevent anything as they are inanimate, stationary objects. However, criminals do not want to be seen — caught in the act, identified — and will avoid malicious behavior when they know they are being watched, especially recorded! Most of the time when homes that have security systems are robbed, it is because the security system was not visible and the thieves did not know they were being watched. Simply placing cameras in plain view is usually enough to deter all sorts of behaviors, including the postal service delivery-person from mistreating packages left on the porch and neighbors allowing their dogs to conduct their personal business on your lawn. It is incredible the difference in behaviors when people know they are being recorded and footage can be played back at any time.

As we mentioned, make sure that your surveillance cameras are in plain view, let potential intruders know that you have your eye on them. As with anything else in life, placement of surveillance cameras is all about location, location, location! We recommend that you use a mix of plain view and discreet cameras around and in your home. Place an obvious (working) camera at all entries into your home, such as front, back, and side doors. You can mix in non-working cameras with fully-functional ones to save money, but ensure that the entry ones are functional! Place obvious cameras a little higher on the sides of your house that would get a good view of the majority of the side of the house it covers and would be difficult to reach. You can place smaller, more discreet cameras on the front of a porch overhang, pointing at your doors, this way if a criminal disables the obvious ones, you can still have video footage that they are not aware of.

Surveillance cameras are only as good as the system supporting them.

Even the best-planted security camera is useless if it isn’t working or works but doesn’t alert you! If you have a surveillance camera that displays the footage to a monitor in real time, it doesn’t do any good if no one is watching and you don’t have the ability to review the footage. The best surveillance camera systems will operate on motion detection and will alert you (or law enforcement) if anything is detected. Remember the old adage see no evil, speak no evil, hear no evil? it does no good to have a camera see something that doesn’t communicate the information for you to know! If you are going to take the time and money to invest in a surveillance system, make sure the system is reliable and has the ability to intervene if ill-meaning criminals ignore the warning and attempt something anyway.

Are surveillance cameras effective at deterring crime? The simple answer is, yes. Although there are criminals out there who do not care about a security system, they are few and far between. The majority of criminals are opportunists who seek out easy targets with the least risk of getting caught. Don’t be an easy target! Invest in a quality surveillance system, that includes security cameras, like those available at New York IT Service, Inc. We have all the video surveillance equipment and monitoring equipment that you need to protect your home or business. Contact us now!